I was really intrigued by the recent discussion about college and disadvantaged students. Research is showing us that those who come from poverty still earn less in their lifetime, even with a college degree, than those from more affluent backgrounds. And those are the students who actually finish.  Far too many low-income students rack up large amounts of debt, but fail to graduate. In the long run, they are worse off. These are profoundly important facts to inform our discussions around education policy. This matters to me because I am a public school teacher and education scholar. It matters even more to me because I once was a poor kid in college.

I was born and raised in Southern Appalachia in one of the many lingering pockets of extreme rural poverty in America. Not only was my family and most of my community impoverished, we were culturally and physically isolated. Violence and alcoholism were common fixtures. My mother was a product of the foster care system, my father struggled with an undiagnosed learning disability, and I had a special needs sibling. I graduated in the top 5% of my class with a 4.65 GPA despite working 35-40 hours per week, starting the week of my 16th birthday. I was a first generation college student. I am sure I would have been a dream come true for an Ivy League admissions officer in search of a scholarship recipient. I didn’t apply to any Ivy League schools, though. I attended the closest public university to me, 30 miles away. And I only did that instead of going to the local community college because I was offered a scholarship to become a teacher, something that I was passionate about.

I also tried to quit three separate times. By quit, I mean car-packed-up-and-driving-away-in-the-middle-of-the-semester quit. This would have been a disaster for me as the largest chunk of my full financial aid package was a scholarship loan that had to be paid back with my service as a teacher—or in cash with interest. Quitting college would have left me in significant debt. My advisor came and got me each of the three times and convinced me to come back, and talked me down at least one more time before I made it to the car. Why did I want to leave? Why was college so difficult for me? It wasn’t academics; I maintained a 4.0. The problem for me was culture shock. Specifically, I had been thrown into the deep end of unacknowledged middle-class norms and values.

The problem for me was culture shock. Specifically, I had been thrown into the deep end of unacknowledged middle-class norms and values.

For example, the polite but formal, pleasant but distant *professional* approach that many of my professors took to student interaction seemed cold, impersonal, heartless, and utterly foreign to me. I had no model to work from. Where I came from, exceeding politeness and formality was a sign of disrespect and distrust. Those of us from a working-class culture have a level of comfort with expressions of emotions and even anger that can make middle class folks squirm. Even today, the idea of compartmentalizing *personal* and *professional* is remains utterly foreign to me. It’s probably clear by now that my early interactions with professors didn’t go smoothly. Like the time I called one of my professors to tell her I would be missing class due to a death in the family. She couldn’t comprehend how the sudden passing of my fiancé’s grandfather justified missing multiple days of classes. To her, that was irresponsible. I couldn’t comprehend how I could offend my future in-laws by not being with them during that time. To me, that was irresponsible.

We have very strange habit in this country of pretending that class differences (and the profound cultural difference that come with them) don’t exist. In education, we discuss concerns that poor students are being approached from a *deficit model.* Which is a really polite way to say that middle-class folks assume their culture and value systems are superior to that of working class people.

Here’s a handy description of the differences taken from the work of Barbara Jensen, a scholar who has extensively research the culture of class in America: 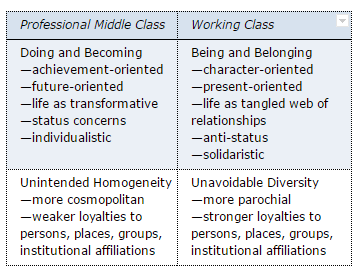 Of course, this is a neutral depiction. It is easy to see how value judgments can be made from each position. From my perspective as a young college student, middle-class culture was selfish, greedy, disloyal, materialistic, opportunistic and shallow. Frankly, I still think that way to some extent. Why should we value individualism more than loyalty and commitment to a community? I have never been competitive or understood the value of being goal-oriented. How, exactly, does creating a goal in any way help you accomplish it? What is the point other than to establish an artificial sense of accomplishment by achieving some arbitrarily defined thing?

There are so many ways that K-12 education and especially higher education force middle-class culture onto all students. An excellent example is the fact that most colleges force students to live in the dorm for at least the first year. Numerous obstacles such as lack of public transportation and policies that prohibit cars on campus can make it difficult for students to get home for visits. In addition to rules and obstacles, there is often active discouragement or stigma placed on commuting from home or even making frequent visits. One of my high school students lost her only living parent in the February of her senior year, just two weeks after her 18th birthday. I helped get her off to college, but despite working our request way all the way up to the chancellor, she was forced to spend her first year in the dorm. This meant she was homeless during breaks, had to pay for storage for her belongings, and find new homes for her beloved pets. The only concession the school allowed was for her to be able to park her car on campus, of course with an added large parking fee.

Despite working our request way all the way up to the chancellor, she was forced to spend her first year in the dorm. This meant she was homeless during breaks, had to pay for storage for her belongings, and find new homes for her beloved pets. The only concession the school allowed was for her to be able to park her car on campus, of course with an added large parking fee.

The goal of policies such as this seems to be the development of independence, adulthood, and adult identity separate from family. These goals, of course, are pretty much the archetype of middle-class values. On the other hand, poor kids generally have already learned a lot of adult skills and independence. Forcing poor students away from the grounding that family and community provide and also exposing them to peer pressure from students who have far less to lose from unwise choices can lead to disaster. Adding insult to injury, many people advocate exactly for such policies since they get disadvantaged college students away from *negative influences* and *poor role models.* There was a 60% freshman dropout rate at my college when I attended. In trying to address this problem, the university assumed the reason was that students were bored in a rural location (especially those from down state), which was exacerbated by the fact that so many students went home every weekend. They desperately tried to solve the *suitcase problem* instead of more closely examining the reasons why students went home.

So, if we really believe in college opportunities for all and we really want poor students to succeed in college, then it is long past time to unpack and deconstruct the culture and value systems that are being privileged on campus—and in many K-12 schools as well—and reconsider policies that belittle and dismiss working-class cultural values.

Rita Rathbone is a lifelong resident of North Carolina. She is a teacher, magnet coordinator, and curriculum specialist in the Durham Public Schools in Durham, NC. Rita is obsessed with all things Lego and is, in her words, a damn fine cook. Follow her on Twitter at @patimpteach