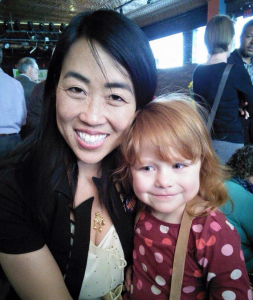 EduShyster: That sound you just heard was me uncorking a box of champagne. But you still have to win the general election in November. Did I start celebrating too soon?

Helen Gym: No—you didn’t celebrate too early. I’m not worried about the race but I definitely want to make sure that in the final tally in November that I move up in votes and send a clear message about voters prioritizing public education and communities. And just to put things in perspective, Democrats outnumber Republicans in Philly by more than 7 to 1.

EduShyster: I’m going to ask the question that’s on a lot of readers’ minds, which is *why am I so obsessed with a city council race in a city where I don’t even live?*

Gym: This wasn’t about just one race. In November, we helped to topple the first sitting governor in Pennsylvania history, since the two-term system was implemented. It was one of the few bright spots in otherwise depressing national mid-term races. We were then able to roll that energy into the municipal elections this spring and not only elect a mayor and a city council candidate who touted a pro-public schools agenda but in the process, delivered a resounding rejection to a pro-privatization, corporate education reform movement that had consolidated behind other candidates. It was remarkable on so many levels, but for me, it was an uplifting, exhilarating campaign built on years of collaboration, partnership and base building.

EduShyster: Enough with the inspirational talk—let’s go back to the voters’ *resounding rejection* of a pro-privatization, corporate education reform movement. I’m just going to have a tiny bit more champagne.

Gym: Philadelphia is a place where corporate education reform has done so much damage. No one is a bigger symbol of that damage than the hedge fund billionaires behind the Susquehanna Group. They poured nearly $7 million into a municipal election, dwarfing any amount of money coming from elsewhere. As I said in a press conference, these were three billionaires looking to destroy public education in a city they would never live in and hurting children they would never know. That about sums it up, and it’s why the public resoundingly rejected them and their narrow abusive agenda that had done so much harm not just to children but to entire neighborhoods and communities. 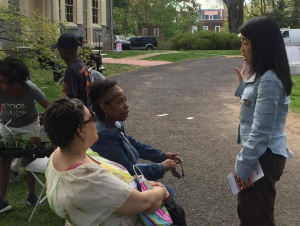 EduShyster: I had a chance to follow you on the campaign trail for a day—well, part of a day; I collapsed from exhaustion midway through! But one thing I heard you tell voters again and again was that you don’t lift up a neighborhood by abandoning its schools. And it seemed like wherever we were, that message really spoke to people.

For years, we’ve been subjected to relentless rhetoric  that people don’t want to invest in public institutions anymore, that their schools have failed and their teachers have failed, and that school choice was the only option people had – and they ought to be grateful to those who provided it

Gym: For years, we’ve been subjected to relentless rhetoric that people don’t want to invest in public institutions anymore, that their schools have failed and their teachers have failed, and that school choice was the only option people had – and they ought to be grateful to those who provided it. But as I campaigned around the city, I was amazed at how many communities had really soured on that idea. Especially in the neighborhoods that suffered from the most disinvestment, people really understand just how important their public institutions and their public spaces are. I mean, you can’t be electing officials who want to shut down our schools, take away services from communities and cut taxes on the wealthy and call that working in the public interest. We had gone so far to that extreme that none of this corporate education reform message was resonating any more. It felt hollow, empty and defeatist. I also think that a lot of people now really understand that the problem isn’t so much that our public institutions have failed, but that we’re competing with other interests that are sucking away our ability to invest in them. 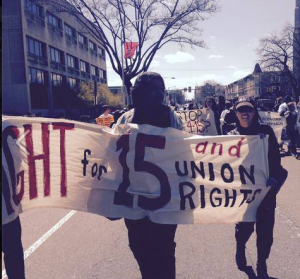 EduShyster: Voters also overwhelmingly approved a resolution that would return Philly’s public schools to local control. Is it just me, or does it seem like if you give voters a vote over whether they want an actual vote vs. the vote with their feet kind of vote, they always seem to vote for the *vote vote*?

Gym: This was a non-binding resolution that made it onto the ballot thanks to 40,000 signatures collected by the Working Families Party and other groups and coalitions. The resolution called for the abolishing of our 14-year-old state takeover board, the School Reform Commission, and returning power back to our district and our city. Although it was nonbinding, I think it was another indicator of how strongly people feel, and that the schools issue is bigger than just, say, K-12 learning inside of school buildings.  It speaks very much to the issue of self determination in a city that has long seen power eroded through a host of state takeovers from our parking authority to our schools. I think it shows just how much this election was driven by issues that really mattered to people: voice, local control, investment in public education, and political power in partnership with grassroots communities that had been leading that struggle for a long time.

EduShyster: OK—let’s assume things go as predicted in November, and you end up *at large and in charge.* What’s at the top of your agenda? 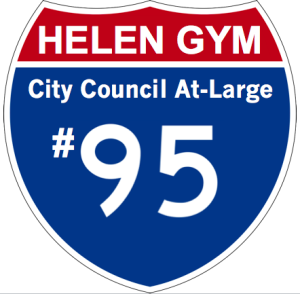 Gym: Well, I am not going to squander my time, that’s for sure. There’s a lot to do. We want to make sure that we’re going to fund our schools responsibly and really prioritize what’s happening in our public institutions, and our public schools in particular. I think we need to restore and rebuild the public trust around our schools—that’s a more complicated issue and is going to require the district to be more accountable to communities. We can do that through public hearings and testimony and better reporting on data that’s actually meaningful to parents and stakeholders. We really want to go back to the issues that resonate with communities as opposed to the endless distractions that come when education reformers helicopter in. We want basic services in schools, trauma-informed care and an understanding of how public schools can serve as community-based anchors. It’s a bigger vision, and if we can win back the public trust, we can start to build a culture of investment around our public schools and our public spaces.

EduShyster: I know that there are candidates for various local offices in other states who watched your race closely, although perhaps not quite as closely as I did 🙂 Any words of wisdom that you want to share? 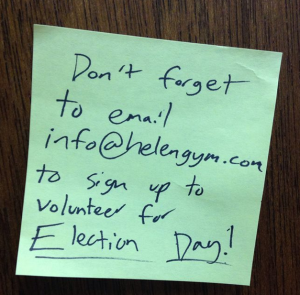 Gym: The biggest lesson is that this was work that was built up over years. There’s no short cut. It wasn’t like some amazing superstar suddenly burst onto the scene. We’re all just pretty ordinary people who’ve learned to work together, and figured out how to build a bigger, broader movement over time. I think that’s the lesson that other communities can learn from. That when your work has integrity over time, and you work collaboratively, the broader community can see it come to fruition. I think the other lesson here is about the difference between political power and a grassroots movement. Political power was not the first thing we sought. Instead, we were really trying to build a stronger base to highlight the voices of different communities across the city. That’s how you change things, when a collective movement builds and earns political power rather than just grasps for it.

But if people want to tear down public institutions and use their wealth, influence and backdoor politicking to do that, the public is going to reject them.

EduShyster: Speaking of teachable moments, what’s the lesson that the education reform movement should learn from this election?

Gym: Humility. Especially when it comes to the consequences of policies that go wrong. My hope would be that so-called education reformers finally understand they don’t have all the answers, that democracy matters when we deal with enormous public institutions because they impact so many diverse people who live in circumstances we can’t even imagine, much less understand. And that means we have to be thoughtful and careful about their fragility instead of the reckless idea that the private market can easily substitute for public spaces. Of course there’s  room for those who want to invest in and transform our schools. No one wants things to stay the same. But if people want to tear down public institutions and use their wealth, influence and backdoor politicking to do that, the public is going to reject them. This election sent a loud and clear message: the place to start is investment in public institutions, and real partnerships with community organizations and parents and educators. Reforming our institutions takes collaboration and solutions rooted in vision and possibility, not narratives of failure. It’s a lesson that hope always wins the day.